Break in instructions are provided with every FloggleWerks pipe. However, for those persons seeking further information on proper development of your pipe cake and maintenance, we provide the following information.

First, your FloggleWerks all wood pipe is uniquely designed to provide a cool smoking experience without harmful glues. 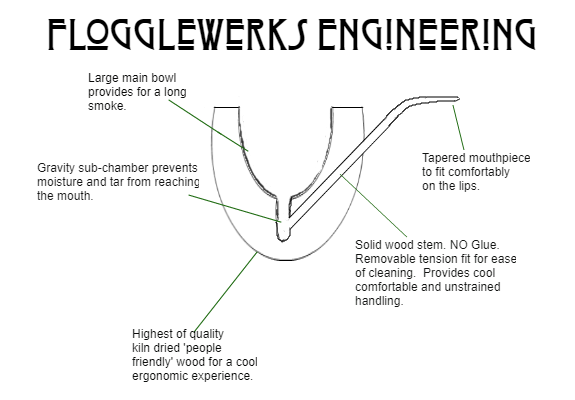 Pipe smoking is meant to be leisurely and it is not uncommon to take up to 30 minutes to smoke a bowl. Breaking in your pipe should be just as leisurely. Be sure to evenly pack and light your tobacco without creating rapid hot spots while drawling on the lit pipe, which may cause your pipe to crack.

As you break in your pipe, following the FloggleWerks instructions, slowly filling the bowl with each smoke and letting the 24 hour cooling process to build your cake you may notice small carbon cake fissures forming at the entrance of the Gravity Sub-Chamber.  These fissures are completely normal and will fill over time.  Not all pipes will experience these fissures, as they are a product of tobacco moisture forming rivulets down to the sub-chamber. A proper protective cake is forming under these rivulets.

Properly cared for, your FloggleWerks pipe will last a lifetime. After a pipe has been smoked for an extended period its cake may become so thick that it significantly reduces the capacity of the bowl. In very extreme cases, an overly thick cake may actually crack the bowl due to differential expansion. Ideally, the cake should not exceed one-sixteenth of an inch (about 1.5 mm) or so. When the cake exceeds this thickness, it should be carefully reamed. Whatever reaming device you choose to use, work slowly and carefully so as not to damage your pipe. The idea is to gradually shave the cake down to the proper thickness, not scrape it out in chunks.

When your pipe is thoroughly cooled after smoking, remove your all wood stem and run a pipe cleaner through the stem to clear out any build up or moisture. Do not leave the pipe cleaner in the stem, as this will allow bacteria from moisture to form.

Properly replace your stem after cleaning:

Please be sure that you are seating the stem properly itself. This may seem self-explanatory, but you'd be surprised and how often this can be the fix you're looking for if your stem fit feels loose. The tapered non-flattened end should be inserted into the bowl, directly following the intake hole. Don't be afraid to push firmly, as the stem may go in further than you think - and that is a good thing! A slight twist while inserting can ensure a nice air-tight fit, then straighten as needed. Please also be sure that you do not purposefully remove the stem while your pipe is still hot at any time, as this can cause warping in the wood and you might end up with a bad fit. I do suggest to try inserting it firmly and having a smoke, and allowing your pipe to cool completely afterward without removing the stem. Doing this a few times over the course of the break-in period can really secure the fit of the two pieces as they form together during the heating and cooling process.

The exterior of your pipe can be wiped with a slightly damp cloth.  We do not suggest using cleaners or alcohol, as these tend to remove the woods natural oils.

Breaking in Your New Pipe

During the break in process, let your pipe rest for 24 hours to fully cool and dry between smokes. This protects against cracking.  NEVER take your pipe apart before it is cooled - Doing so can cause warping and your pipe might not fit back together correctly.

Myrtlewood, The Other Avocado Tree

Myrtlewood is food and people safe. The leaves and bark only can be a sensitizer to the woodworker, as these areas house the natural protections against pests and fungus.

The tree was formerly known as Oreodaphne californica.[2] In Oregon, this tree is known as Oregon myrtle, while in California it is called California bay laurel, which may be shortened to California bay[3] or California laurel. It has also been called pepperwood, spicebush, cinnamon bush, peppernut tree, mountain laurel,[5] and balm of heaven.[5]

The tree's pungent leaves have a similar flavor to bay leaves, though stronger, and it may be mistaken for bay laurel. The dry wood has a color range from blonde (like maple) to brown (like walnut). It is considered an excellent tonewood and is sought after by luthiers and woodworkers.

Umbellularia has long been valued for its many uses by Native Americans throughout the tree’s range, including the Cahuilla, Chumash, Pomo, Miwok, Yuki, Coos, and Salinan people.[13] The Concow tribe call the plant sō-ē’-bä (Konkow language).[14]

The leaf has been used as a cure for headache, toothache, and earache—though the volatile oils in the leaves may also cause headaches.[15] Poultices of Umbellularia leaves were used to treat rheumatism and neuralgias.[16] A tea was made from the leaves to treat stomach aches, colds, sore throats, and to clear up mucus in the lungs.[17] The leaves were steeped in hot water to make an infusion that was used to wash sores.[16] The Pomo and Yuki tribes of Mendocino County treated headaches by placing a single leaf in the nostril or bathing the head with a laurel leaf infusion.[17]

The chemical responsible for the headache-inducing effects of Umbellularia is known as umbellulone.[4]

Both the flesh and the inner kernel of the fruit have been used as food by Native Americans. The fatty outer flesh of the fruit, or mesocarp, is palatable raw for only a brief time when ripe; prior to this the volatile aromatic oils are too strong, and afterwards the flesh quickly becomes bruised, like that of an overripe avocado.[18] Native Americans dried the fruits in the sun and ate only the lower third of the dried mesocarp, which is less pungent.[17]

The hard inner seed underneath the fleshy mesocarp, like the pit of an avocado, cleaves readily in two when its thin shell is cracked. The pit itself was traditionally roasted to a dark chocolate-brown color, removing much of the pungency and leaving a spicy flavor.[16] Roasted, shelled “bay nuts” were eaten whole, or ground into powder and prepared as a drink which resembles unsweetened chocolate. The flavor, depending on roast level, has been described variously as “roast coffee,” “dark chocolate” or “burnt popcorn”.[19] The powder might also be used in cooking or pressed into cakes and dried for winter storage.[16] It has been speculated that the nuts contain a stimulant;[20][21] however this possible effect has been little documented by biologists.

Some modern-day foragers and wild food enthusiasts have revived Native American practices regarding the edible roasted fruit, the bay nut.[18][20][23]

Umbellularia californica is also used in woodworking. It is considered a tonewood, used to construct the backs and sides of acoustic guitars. The wood is very hard and fine, and is also made into bowls, spoons, and other small items and sold as “myrtlewood”. It is also grown as an ornamental tree, both in its native area, and further north up the Pacific coast to Vancouver in Canada, and in western Europe. It is occasionally used for firewood.

According to a modern Miwok recipe for acorn soup, “it is essential that you add a generous amount of California laurel” when storing acorns to dry, to keep insects away from the acorns.[24]

One popular use for the leaves is to put them between the bed mattresses to get rid of, or prevent, flea infestations.

The wood is used as lumber in furniture making, especially highly figured specimens.[25]

“Myrtlewood” money
“Myrtlewood” is the only wood still in use as a base “metal” for legal tender.[26] During the 1933 “interregnum of despair” between Franklin Roosevelt’s election and his inauguration, the only bank in the town of North Bend, Oregon—the First National—was forced to temporarily close its doors, precipitating a cash-flow crisis for the City of North Bend. The city solved this problem by minting its own currency, using myrtlewood discs printed on a newspaper press. These coins, in denominations from 25 cents to $10, were used to pay employees, with the city promising to redeem them for cash as soon as it became available.

However, when the bank reopened and the city appealed for people to bring their myrtlewood money in to redeem it, many opted to keep their tokens as collector’s items. After several appeals, the city announced that the tokens would remain legal tender in the city of North Bend in perpetuity. The unredeemed tokens have become very valuable, because of scarcity and historical interest. Fewer than 10 full sets are believed to exist.[27]